Digital Radio: DAB+ in the Van

About 6 years ago I bought a Volkswagen T5 Multivan). It was a choice between that or a Mercedes Vito. The Vito is great but was a fair bit more money. Or there was the hilariously ugly SsangYong Stavic!, but that’s no choice at all. Google for some amusing comments on this last abomination. (update - several other minivan choices became available about 6 months too late for us)

If you have to drive a van the VW is OK. I don’t have much to complain about, although I could mention the horrible turbo lag and general hugeness, but that’s balanced by the internal hugeness, convenience of sliding doors, being able to get to any seat from any door or the amazingly tight turning circle. The thing I seriously hated since day 1 was the sound system.

VW Australia installed some Eurovox 6-CD changer as original equipment but it had a fault, the display didn’t illuminate at all. So it went back to the dealer and was replaced or fixed, but in the process they broke a trim piece. On the next service that was “fixed” with glue but of course it didn’t hold up long, we lived with it. Who’s got time to keep taking a vehicle back to the dealer? The dealer knows this.

One issue it had was crackles and static on all but a few Melbourne FM stations. Another issue was the weird angle you have to insert a CD at for it to be loaded right. A third is that nobody ever remembers to bring new CDs so once out of radio range you’re listening to an album you used to like for the 41st time.

There are at least three iOS devices on the road on any family holiday so playing music from one of those seemed like a good idea. With no front AUX jack and no information on how to interface this Eurovox thing to an iPod any other way a FM transmitter was the only choice. But they barely work in metropolitan areas and will be overpowered by every regional station you get within 100km of – do not waste your money. I have had three different kinds and all worked equally badly.

Finally I decided to replace it, and AUX-input was priority number one. Mechless seemed like a good idea. Didn’t care much about Bluetooth or phone integration. Zero gauge wiring, subwoofers, mono block amps and hojillion farad capacitors interest me about as much as neon underbody lights. I did notice some models with DAB+. Sony, JVC and Kenwood have models available in Australia. I couldn’t find much information about them, probably because DAB+ is limited to a small selection of regions right now. I have a JVC in my other car and it’s OK. I used to be a huge Sony fan but got very tired of everything being incompatible or proprietary. In the end I bought a Kenwood KDC-U5049DAB. Got it online for way less than retail.

DAB+ works on a different frequency to AM or FM so a separate antenna is required. Job No. 1 is to install the DAB+ antenna, a stick-on conductive film that needs to mount close to a pillar so you can stick the signal amplifier unit onto the glass, contacting the antenna itself, and run the cable back to where the head unit is mounted. There are clear instructions included in the box. 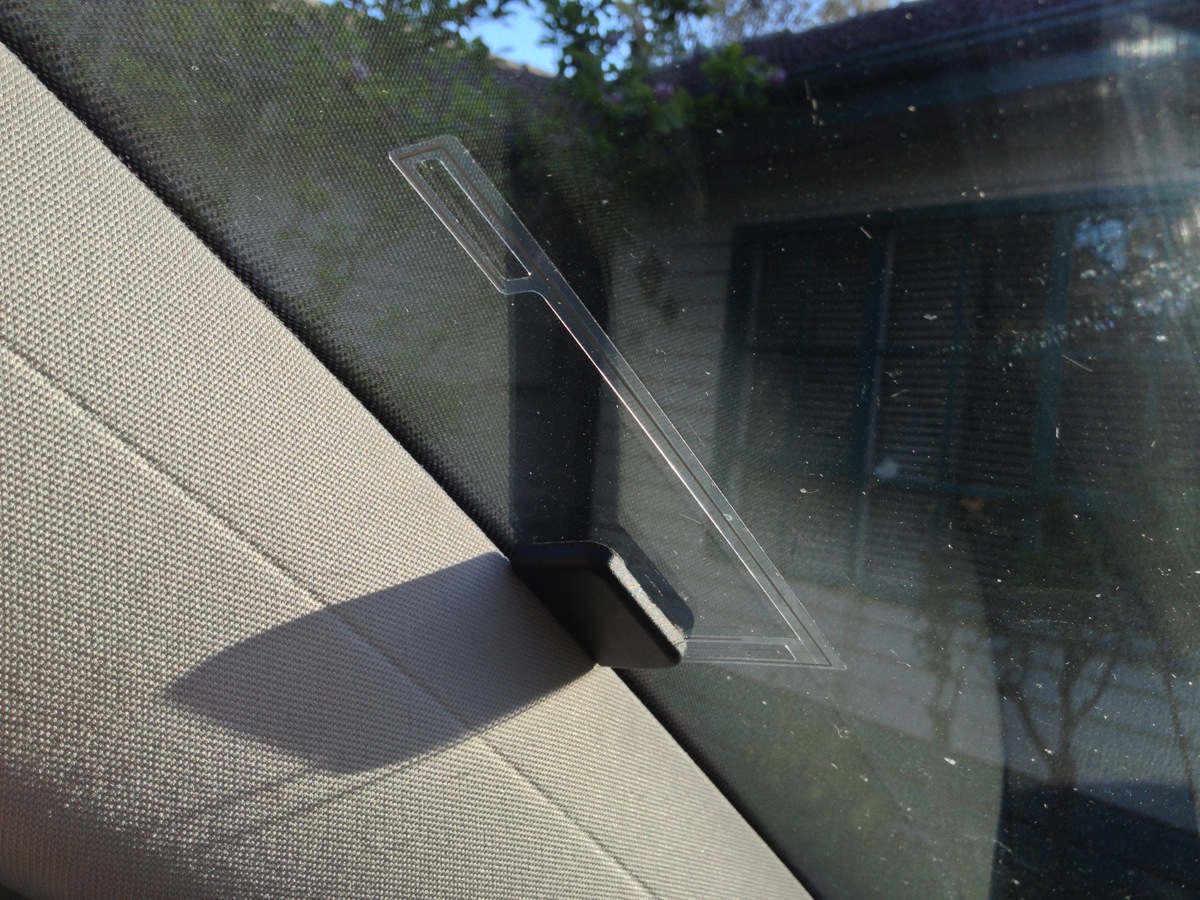 Sticking film onto glass is easy but getting it installed behind the neatly-fitting trim pieces looked like it was going to be the tough bit. I would rather change a head gasket than get upside down under a dashboard again so I wasn’t looking forward to this at all. But it wasn’t so bad…

The grab handle on the passenger side A-column has a clip-off cover exposing two T30 Torx bolts. When that is off the whole trim piece unclips with careful steady force. The glove box (mine doesn’t contain gloves either) is held in by eight T26 Torx bolts, five under black plastic covers. Lid and box remove as one unit, allowing the cable to be snaked through behind on the way through to the centre console. Getting it all back in place was easy too. The antenna and amplifier block are not very noticeable on the window, certainly not when you’re the driver. In a van this wide it is basically side-on and invisible from the right side.

Removing the original head unit was also easier than expected. The tray on top of the dash just lifts out from the window side once the clips let go, then the centre panel has two Torx screws to remove before it too lifts away. Detaching the wire from the driver’s seat heater control allowed it to all swing away for the duration. Then there were just two phillips head screws holding the head unit’s bracket in – one hole was stripped, thanks to the Volkswagen service department monkey who did that. With the physical restraints removed the whole unit came out revealing a harness adapting the Eurovox connector to ISO10487 – sweet! 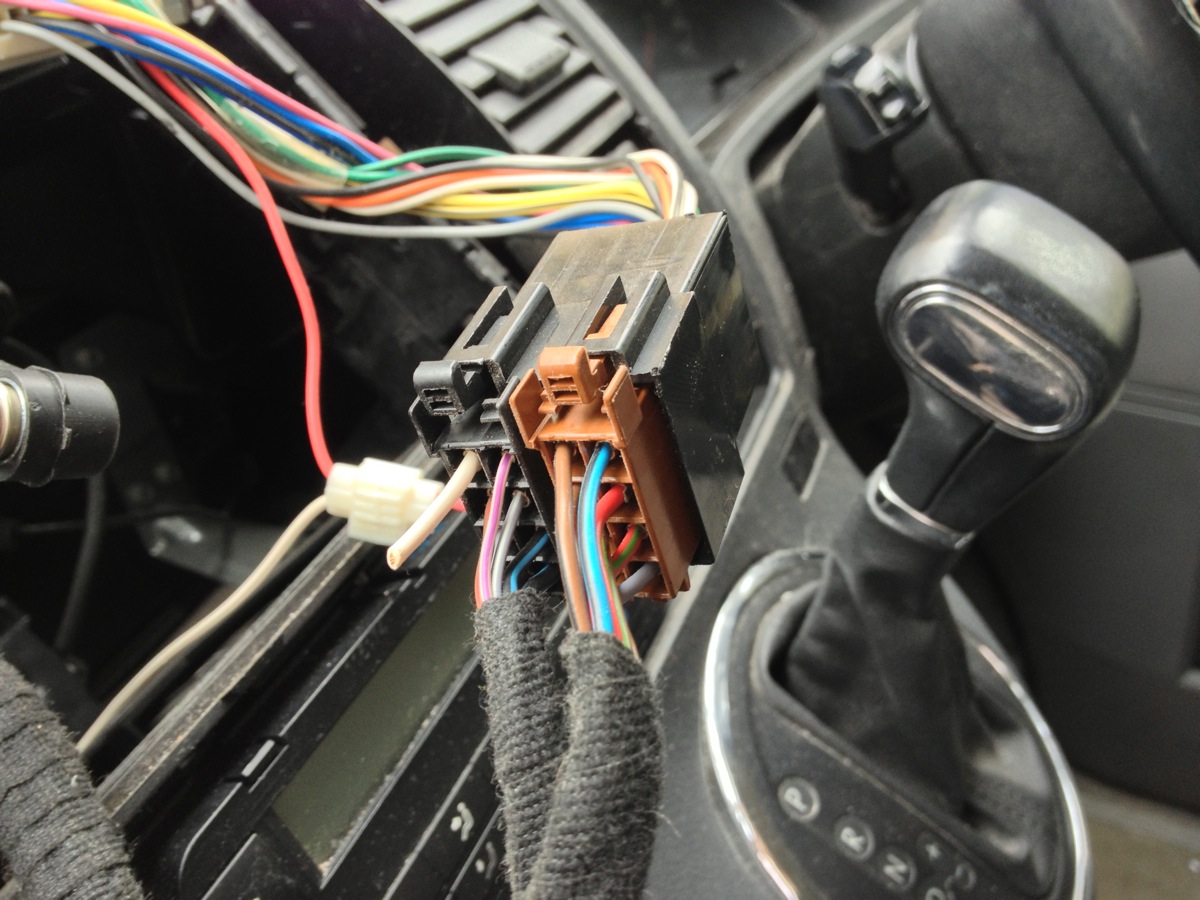 The only wart was a power connection made to the FM antenna signal amplifier. Or so I thought… I happily went off to Repco and bought the Kenwood to ISO adapter, pushed my luck by plugging it all together one hour before a family trip, but it was as easy as I had hoped. Until we set out and I discovered the thing had gone back to demo mode with no station memory – so no permanent power connection. Still, it worked.

Back home I pulled it out and did some comparing between the Kenwood and Eurovox harnesses – it was as simple as the permanent and switched 12V connections being swapped. Which is why you don’t do these things in a hurry. As convenient as off the shelf adapters are there's always a chance it is wrong, there are just too many variants out there. I didn’t have to cut any wires, just used a tiny screwdriver to release the spade connectors from the plastic housing and swapped them over. 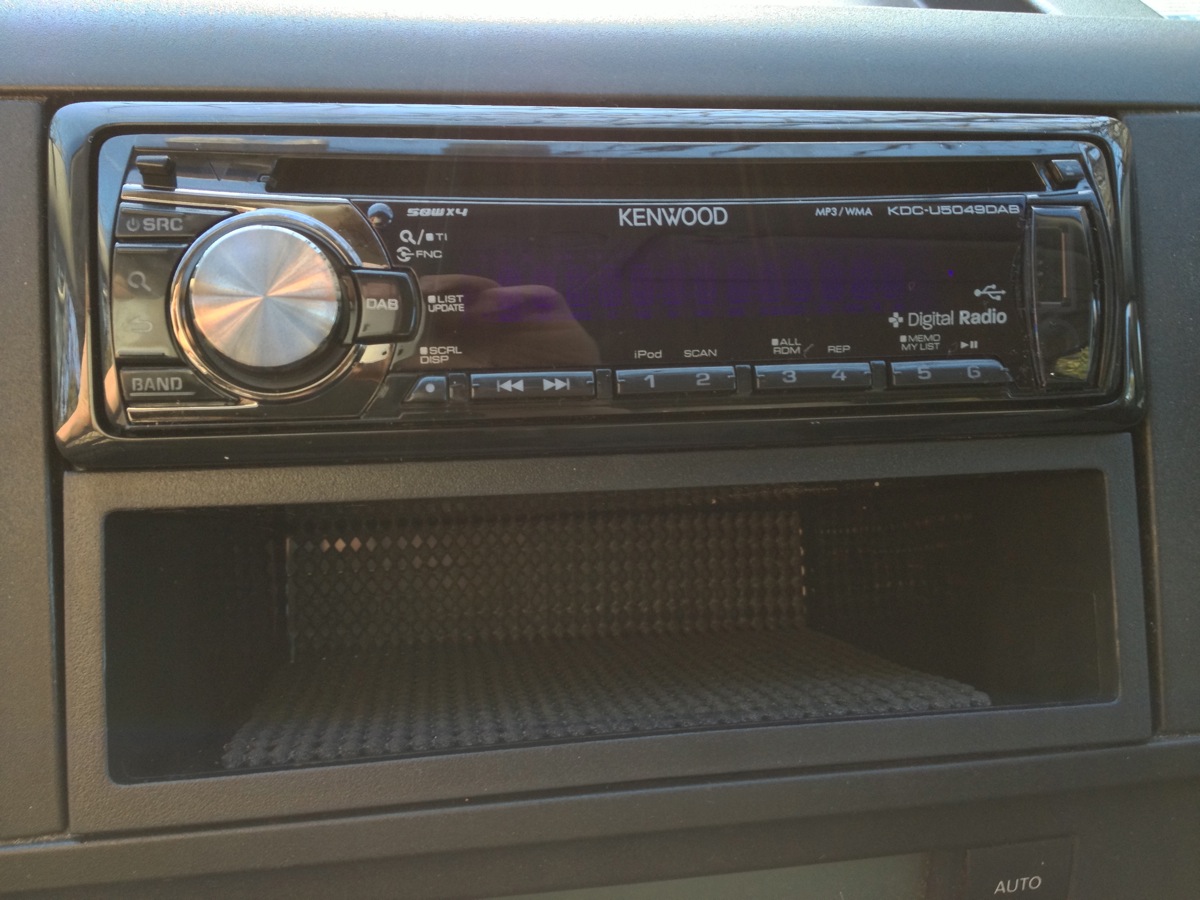 The original unit was double DIN so I needed to fill up the space with a $15 Aerpro single DIN pocket. It’s got some rubbery mat from Bunnings in it to stop things sliding around.

Aux: Works like you’d expect – a stereo 3.5mm lead from something with a headphone or line out plays music, sounds great. Everything is controlled by the connected device. If you forget to pause the music when you turn the car off it keeps playing, could cost you just your place in the music or all your battery.

USB: Interesting – basically you plug in the iOS device and get a hierarchical menu controlled by the main knob and back button. It’s not as easy as selecting music from the iOS device of course but it’s usable and might be the best way if you just want to pick one playlist. While connected via USB the device is charging too. I didn’t try playing any music from a thumb drive, but they are going the way of optical media and chances are I never will.

Tuner: Nothing much to report here – without the power to the VW’s antenna signal booster a few stations came in, with power they all come in strong. I haven’t been out driving next to a tram yet but I am hopeful it will be better than the old one for resistance to interference.

DAB: This is a good feature but whether it is worth $100 over the price of a head unit without depends on how much radio matters to you. I like to hear Melbourne’s PBS FM and it’s on DAB+. There are more stations available generally and to me they are more interesting stations, they certainly run less ads. If you want to hear the football you can browse around FM, or you can pick SEN or ABC Grandstand by name and know you’ve got the right station.

BUT it isn’t CD quality. It is better than AM for sure but I don’t think it is any better than a strong FM signal. I’ve been reading people with serious stereo tuners complaining about the possibility of their superior analog FM being turned off and now I think they have a point. But in a car DAB+ is seriously good, for the extra choice you get, for the ease of finding what you want and for the clear, no-static sound. That’s worth $100 to me.

However Kenwood’s display during DAB setup is kind of confusing. The unit needs to download information about the digital stations available but until it has some you get no indication of what is going on, in fact if you use the display button to switch to signal strength report it will say NO SIGNAL. I thought this meant I had done something wrong with the antenna installation when I saw this.

The manual explains how to initiate download of station info – when you do it reports that it is updating and that it has finished, but still no stations. However after ten minutes or so I tried scan tuning again and plenty of stations came up. I guess signal strength only means “this station’s signal strength” because then it reported plenty of signal. There really needs to be more feedback during this process.

Remote: It comes with a remote, but I can reach the controls from where I sit and there’s no way I’m passing control back to one of the kids. I’d rather pay $2 less and not have a remote, OK Kenwood?

If you want to see an (exhaustive) demo of the Kenwood KDC-U5049DAB, see this video Simonskie250 from Adelaide. He’s wrong about one thing though, it does not have to do the scan on each startup – that’s configurable. Possibly this changed in a firmware update since he posted it.

While I feel like I have bought an early adopter model – there will be something twice as good next year for half the money – I’m very happy with this change. I hope this post helps someone who might be looking into DAB+ for the car, or who needs to know how to install in a T5 Multivan.

Update: Note on the Multivan - it has been a lot of trouble. A big piece of trim came off the pillar supporting the sliding door. VW said "work out how to reattach it yourself". Both side windows will no longer remain closed. VW say "$1100 each". The dash gear indicator started displaying all the gears at once and eventually the car wouldn't start. VW said "that will be $4500, we don't know exactly what's wrong but you need a new ECU". The air conditioner drive pulley sheared off. VW said "dang! that's going to run you $2500". Currently the transmission is having a lot of trouble, big clunks between 2nd and 3rd gears - VW say "well, that's another $4500 or so, new throttle body. We don't fix transmissions, you just replace them these days". Maybe should have bought that SsangYong...

Final words: Do not buy a Multivan. The new Mercedes V-series may cost more, but you'd be a fool to buy a VW if it's your own money. Unless you're leasing, then the disposable VW is probably going to last 3 years. Probably. Do buy a digital radio head, with AUX in, if your factory sound doesn't have either.