The Next Mac mini

I love the Mac mini. In 2005, after the WWDC keynote, I couldn't order one fast enough. When I opened one up and found it used a laptop-sized IDE connector, inspiration struck - I built a tiny PCB with a female 2.5" drive connector and a male 3.5" drive connector, allowing use of a cable to connect a full-sized drive (with its own power supply) for better speed and higher capcity. I made and sold hundreds of those little boards, it was my 15 minutes of internet fame.

Over the years I have had several minis. Early on there were two G4s, both with the larger drive modification. After the switch to Intel I've owned at least three or four. Most of my iOS programming has been on a mini. Right now the family still uses a late 2009 2.26GHz with maxed RAM and a OWC Data Doubler allowing an extra drive internally.

The little 2009 mini still chugs along. It gets a real workout from kids playing Flash games, serves music and video around the house and even gets used for Xcode sometimes. My main workhorse now is an 11" MacBook Air 6,1. The Air is almost perfect - surprisingly fast, and 8GB RAM hasn't been the compromise I thought it would be - but it isn't quite portable enough. When I bicycle to work I wish it was smaller because I rarely use the screen or keyboard, I plug it in to a monitor at both ends of the trip.

There is no question that this, the smallest of Apple's laptops, is far more capable than the 2009 mini and it's comparable in performance to a current mini - because the Mac mini has always been basically a headless laptop. In 2009 this was a performance problem since laptop performance lagged far behind desktops. These days, not so much.

So what could a new Mac mini look like? 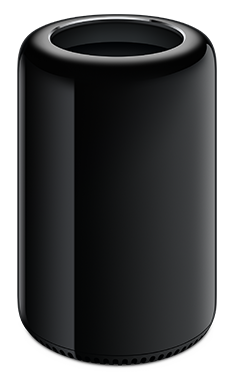 ...but smaller. Inside the Mac Pro is a central triangular heatsink extrusion around which the two GPU cards and CPU card are arranged. A mini only needs a single board containing a CPU with integrated graphics. Sometimes I want discrete graphics but the Air's HD Graphics 5000 graphics is adequate, I play Diablo III on it. It won't be good enough for Star Citizen or Day Z on a big screen but no mini ever has been. It will be the usual choice, Core i5 at the bottom end, Core i7 with more cores at the top. I don't think ARM is at all likely this iteration.

Overall size is probably dictated by the drive, assuming the mini doesn't get PCIe-based flash like the Pro. If it did, how small could it get? Probably smaller than industrial designers would consider ideal. With SSD the machine would need to be built around a cylinder capable of accepting 2.5" drives vertically. It could have a small door on the bottom allowing this drive to be replaced by the user, or the cylinder could lift off as it does on the Mac Pro to allowing access to memory modules. I'm not sure if soldered-on RAM is the future of Apple and it doesn't bother me much but I would like a next generation machine to have a 16GB RAM option.

Cooling would be just like the Mac Pro, an aluminium extrusion to which the hot components are thermally coupled. A fan of similar design to the Mac Pro's could cool the machine if necessary but with the opportunity for a bulky heatsink and adequate convection it would rarely activate.

So what connectors would you expect to find on the back? Two Thunderbolt connectors. Four USB, headphone/line out and microphone. And MagSafe.

Using MagSafe to power the mini would take a bulky component out of the machine. Thunderbolt Display users don't need a power supply since the display already has one - making the display an even more attractive accessory. Everyone else could use an adapter, just like laptop users do.

MagSafe can disconnect, that's true - in practise it doesn't unless you make it, and I don't believe it would be a problem in a situation where the mini sits on the desk and the cable is routed away from hands and feet. If it did get yanked I think I would rather have it disconnect and the Mac lose power than for it go go flying. But what if a small battery were included giving the mini built-in UPS functionality, just like a laptop? It could be just enough for the mini to safely suspend to disk.

Not Ethernet - I got over my distrust of WiFi and it is perfectly adequate for this kind of machine. If you must have Ethernet then buy the Thunderbolt adapter.

Not HDMI - minis aren't for driving TVs or projectors. For Apple TV and larger laptops it makes sense. If you need it buy the Thunderbolt adapter.

That's the mini I want, and what I hope is announced at WWDC. If they do I bet they put it in on-screen and let everyone assume they are seeing a Mac Pro before pulling back to reveal the Mac Pro sitting next to it.